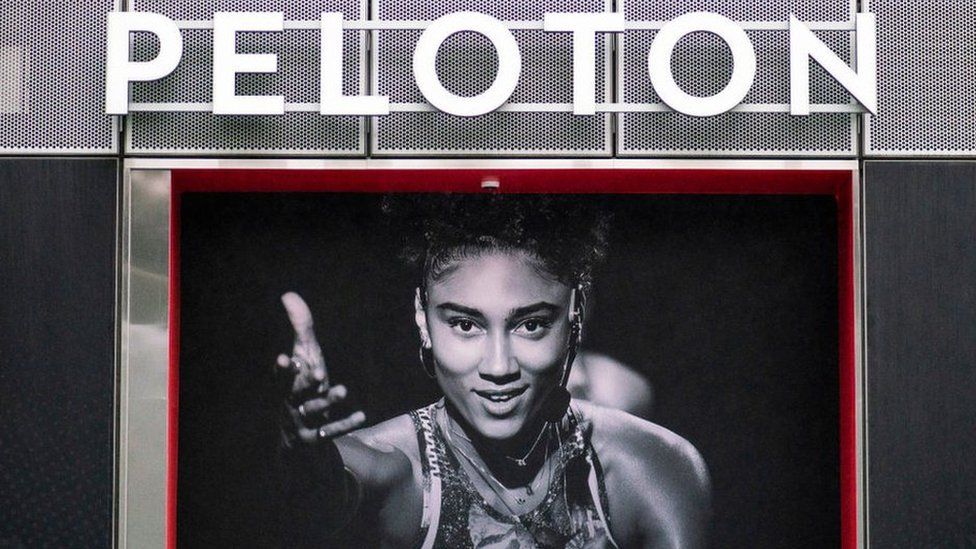 Exercise brand Peloton is attracting bid attention from the likes of Amazon and Nike, according to reports.

They have been attracted by the soaring sales of Peloton's exercise bikes and treadmills during the pandemic.

Suitors have not been put off by the return to gyms post-lockdown, which has left the firm worth less than a fifth of its peak $50bn valuation.

There have also been recent PR disasters when TV characters had heart attacks when using Peloton machines.

Amazon declined to confirm or deny whether it was considering making an offer for the US exercise equipment maker.

When the rumour was reported in the Wall Street Journal on Friday it sent shares in the firm surging more than 30% in after-hours trading.

"We don't comment on rumours and speculation," an Amazon spokesperson told the BBC, while Peloton and Nike did not immediately respond to requests for comment.

The once-stock market favourite has seen its shares slump in recent months, losing more than 80% of its value in the past year.

However, as lockdowns eased the appetite for its bikes and treadmills has dwindled.

In the same month, the US Department of Justice and the Department of Homeland Security said they were investigating the company after a child was pulled under one of its treadmills and killed, while other customers had reported injuries.

In November, Peloton warned investors that it expected revenue to slow in the year ahead.

"The primary drivers of our reduced forecast are a more pronounced tapering of demand related to the ongoing opening of the economy, and a richer than anticipated mix of sales to our original bike," it said in a recent letter to shareholders.

Last month, investment firm Blackwells Capital called for Peloton's chief executive John Foley to be removed from his post and the business to be put up for sale.

Peloton and its customer base are "extremely attractive" to companies like Nike, Apple, Disney and Sony, that are looking to boost their presence in the home, health and wellness and media spaces, Blackwells said in a letter to Peloton's board.

Analysts at Wedbush Securities also expect other bidders to emerge. "We would be shocked if Apple is not aggressively involved in this potential deal process," they said, also mentioning Disney as another possible suitor for the exercise business.

"We believe there will be a handful of technology and consumer brand stalwarts circling for a potential bid with activists also pushing a sale."

Peloton made headlines recently after two television dramas, the Sex and the City revival And Just Like That and Billions, featured story lines in which characters suffered heart attacks while using its bikes.

The company is due to publish its second quarter earnings on Tuesday.

Farm which lost cows to foot and mouth open as gym