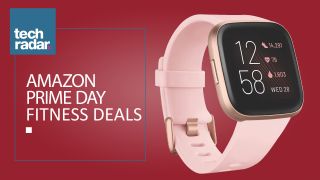 We've seen a huge array of fitness equipment in this year's Prime Day deals, including big savings on top brands like Garmin, Fitbit and XIaomi.

Fitness trackers and smartwatches make up the bulk of this year's deals, so if you've been thinking of investing in a new sports watch then this is the perfect time. Most of these devices are at their cheapest prices ever, and we don't expect they'll drop this low again until Black Friday (perhaps not even then).

We've also found some great offers on other fitness equipment, including treadmills and running headphones, and we'll be keeping a close eye out for new deals throughout the rest of Prime Day so you don't miss a thing.

Amazon Prime Day fitness deals in the US

Garmin Approach S40: $239.79 $189.99 at Amazon Save $49.80 A powerful golf watch to help perfect your performance on the course, the Approach S40 has never been this cheap before, even on Black Friday, making it excellent value on Prime Day. It's almost as feature-packed as the far more expensive S42, and will be a solid investment. View Deal

Garmin Approach G10: $99.99 $79.99 at Amazon Save $20 A gold watch isn't always the best tool for tracking your game and navigating the course, and this neat little GPS unit and digital scorecard can fit easily on your belt or in your hand. It's not dropped below $90 at Amazon before, so this is a modest but worthwhile saving. View Deal

Garmin Fenix 6 Sapphire: $579.99 $499.99 at Amazon Save $80 A premium edition of Garmin's top-end running watch, topped with sapphire crystal. It's very rare to see top-end Fenix 6 models hit $500, and this particular variant currently costs $649.99 if you buy it directly from Garmin. If you've been holding out for a deal on a top-end Garmin, this is it. View Deal

Garmin Venu: $269.89 $219.99 at Amazon Save $50 The Venu is one of Garmin's most striking smartwatches, thanks to its vivid AMOLED screen. The newer Venu 2 offers a couple more features, but this is still a top-notch device. It's been hovering around the $260 mark all year so far, and this Prime Day offer is the best genuine deal we've seen. View Deal

Garmin Venu Sq Music: $199.99 $189.99 at Amazon Save $10 One of Garmin's most fashionable watches, the Venu Sq Music is compact but packed with health and workout tools. It was already a good deal at the original price, at $50 off the RRP, and this offer doesn't knock much more off, but it's still cheaper than you'll find anywhere else. View Deal

Garmin Vivofit Jr 3: $79.99 $49.99 at Amazon Save $30 The Vivofit Jr 3 is a fitness tracker for kids, built to take on the Fitbit Ace. Its regular asking price is pretty steep for a children's watch, but with this Prime Day deal, it's a lot easier to justify as a way to get the little ones more active. View Deal

Garmin Instinct Esports Edition: $299.99 $179.99 at Amazon Save $120 This is a special edition of the super-tough Garmin Instinct that lets you broadcast your heart rate and stress level while you stream games, but even if you don't use that feature it's still a superb sports watch - particularly with $120 off. View Deal

Garmin Instinct Tactical Edition: $299.99 $179.99 at Amazon Save $113 If you thought the regular Instinct was tough, this watch goes one further, built to military standards and in a range of earthy colorways. It's never been this cheap before, so sneak up and grab one while Prime Day lasts. View Deal

Amazon Halo: $99.99 $69.99 at Amazon Save $30 Amazon's screenless fitness tracker monitors is gaining new features all the time, and should be a great investment, particularly at this price. It was slightly cheaper on Black Friday 2020, but if you missed out then, this Prime Day deal is the next best thing. View Deal

Fitbit Sense: $249.95 $199.95 at Amazon Save $50 We were hoping for a good deal on Fitbit's top-end smartwatch, and Amazon has delivered. The Sense typically hovers around $280 these days, so this is a very nice saving. If you've been thinking about splurging on the Versa 3, this is a great opportunity to upgrade to the next model up. View Deal

Fitbit Inspire 2: $98.95 $59.99 at Amazon Save £38.96 This is a huge saving on Fitbit's super-slim fitness tracker. It very briefly dropped to the same price just before Christmas, but that deal only lasted a day so this is another opportunity to snap it up super cheap. View Deal

Fitbit Ace 2: $59.19 $29.99 at Amazon Save $29.20 Fitbit has just launched a new version of its kids' fitness tracker, the Fitbit Ace 3, but the Ace 2 is still an excellent way to encourage your kids to get more active. It's almost half price for Prime Day, and we've not seen it drop below $40 before. View Deal

Fitbit Versa 2: £147 £119 at Amazon Save £28 Looking for a cheap Fitbit deal? The Fitbit Versa 2 usually hovers around the £140 mark on Amazon, and we've not seen it lower than £129 before, so this is a deal well worth snapping up. It's not the latest model (that would be the considerably more expensive Versa 3) but it's still a great buy. View Deal

Withings Scanwatch: £275 £225.47 at Amazon Save £49.53 When we reviewed this hybrid smartwatch last year, we were particularly impressed by its fitness features and classic design, but a little put of by its price. That's no longer an issue, as it's now even cheaper than it was on Black Friday. View Deal

Withings Steel HR: £169.95 £118.95 at Amazon Save £51 This is a solid deal on a stylish hybrid fitness tracker, with essential health stats on a mini LCD screen set into its analog face. It dropped slightly lower than this back in 2019, but it's not been that cheap since. View Deal

Withings Steel HR Sport: £142.98 £117.23 at Amazon Save £25.75 This special edition of Withings' smart hybrid fitness tracker can monitor 30 activities, estimate VO2 max, monitor sleep, and track day and overnight heart rate. Like the regular Withings Steel HR, its price dropped a little lower than this in June 2019, but only very briefly. View Deal

Xiaomi Mi Smart Band 6: £39.99 £27.99 at Amazon Save £12 This little fitness tracker was already great value, and this Prime Day deal makes it super cheap. Despite that, it's genuinely a great device (we were impressed in our tests) and a good alternative to a Fitbit at a fraction of the price. View Deal

Xiaomi Mi Smart Watch Lite: £54.18 £41.29 at Amazon Save £12.89 More of a fitness tracker than a smartwatch, but a very good one for the price, with 11 workout modes, sleep tracking, stress monitoring, and even GPS, which is almost unheard of at this price bracket. It's well made, too. A real bargain. View Deal

Polar Unite: £116 £89.99 at Amazon Save £26.01 The Unite is Polar's entry-level fitness watch, and would be a great step up from a Fitbit if you're starting to take your workouts more seriously. We've not seen it below £98 before, and this price makes it even more beginner-friendly. View Deal

TicWatch Pro S: £222.99 £143.19 at Amazon Save £79.80 The TicWatch Pro S was only released a few months ago, and this is a huge price cut. It's a good-looking smartwatch running Google Wear OS with a good collection of fitness apps. If the superb TicWatch Pro 3 is a little beyond your budget, it's definitely worth your consideration. View Deal

TicWatch Pro 3: £289.99 £195.36 at Amazon Save £94.63 This is one of the best Wear OS smartwatches we've tested, and it's never been below £200 before. It's big and bright, with a fast Snapdragon 4100 chipset, high resolution display and three-day battery life. This is the GPS version, but there's also an LTE/4G version available for a little more. View Deal

TicWatch Pro 3 LTE: £329.99 £230.99 at Amazon Save £99 This is a huge saving on the superb TicWatch Pro 3 with cellular connectivity courtesy of Vodafone. Its previous lowest price was £280 back in May, and it usually costs around £300, so this is a pretty spectacular Prime Day deal. View Deal

TicWatch Pro 4G/LTE: £167.49 £133.99 at Amazon Save £33.50 The TicWatch Pro was first released in 2018, and has stood the test of time well, thanks to its smart dual-layer screen, premium design, and good use of Wear OS. When we first reviewed it, we called it "the best watch you've never heard of", and now the 4G version is its lowest ever price. View Deal

TicWatch GTH: £69.99 £55.99 at Amazon Save £14 The TicWatch GTH launched earlier this year, and was super affordable even at full price. It's definitely more of a fitness tracker than a smartwatch (no downloadable apps or music streaming here), but if you're on a super tight budget then the extra £14 off for Prime Day makes it worth a look. View Deal

Wahoo Tickr Fit: £62.43 £47.10 at Amazon Save £15.33 This heart rate monitor is one of the best alternatives to a chest strap. It fits around your arm rather than your wrist, so the signal isn't disturbed by gripping motions. It hit £60 in February, but has never been this cheap before. View Deal

Garmin Forerunner 45: £159.99 £105 at Amazon Save £54.99 The Forerunner 45 is one of Garmin's entry-level running watches, and is back to its Black Friday price for Prime Day. It usually hovers somewhere around the £140 mark, so this is a great deal if you're getting serious about running and looking to make the step up from a Fitbit. View Deal

Garmin Fenix 6 Pro: £599 £374 at Amazon Save £224.99 If you've been looking for a hot Prime Day deal on Garmin's top-end smartwatch, this is it. It's rare to see the Fenix 6 Pro drop below £400, and this is well, well below. Amazon usually charges around £480 for this watch, and we don't expect it to drop this low again until Black Friday.

Garmin Venu: £329.99 £225 at Amazon Save £104.99 The Venu is one of Garmin's most striking smartwatches, thanks to its vivid AMOLED screen. The newer Venu 2 offers a couple more features, but this is still a top-notch device. It's been hovering around the £300 mark all year so far, so this is a real saving. View Deal

Garmin Approach S10: £139.99 £89 at Amazon Save £50.99 The Approach S10 is Garmin's entry-level golf watch, and at under £90 it's a steal for Prime Day. Sure, it's not the flashiest, but it's got all the essential features you need on the course, and it's back to its Black Friday price right now. View Deal

ProForm Power Series Treadmill: £1,199 £719 at Amazon Save £480 We were hoping to see a good deal on a high quality treadmill for Prime Day, and here it is. ProForm is a good, reputable brand and this machine has good specs, including a decent sized running belt and respectable top speed. View Deal

Aftershokz OpenMove: £79.95 £63.96 at Amazon Save £15.99 We rarely see Aftershokz headphones in the sales – at Amazon or anywhere else – so this is a great opportunity to pick up the entry-level set for a bargain price. The OpenMove haven't had a price cut since their launch in September 2020, and may not get another discount before Black Friday. View Deal

More Amazon Prime Day deals in the US

Cat is the fitness and wellbeing editor at TechRadar. She's a trained run leader, and enjoys nothing more than lacing up and hitting the pavement. If you have a story about fitness trackers, treadmills, running shoes, e-bikes, or any other fitness tech, drop her a line!