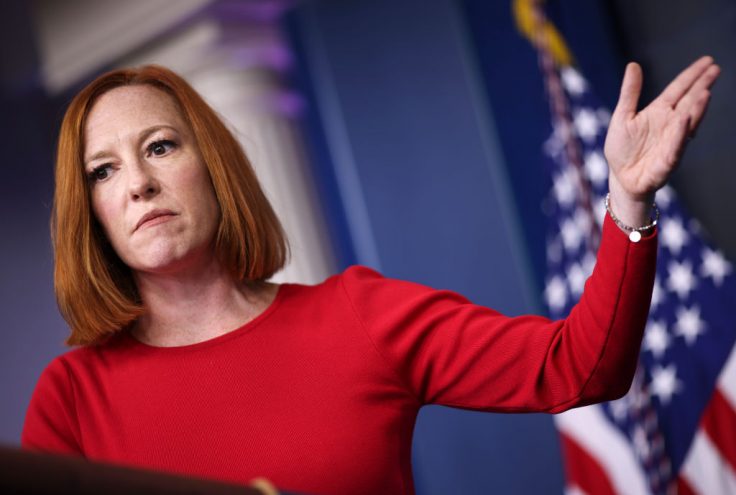 White House press secretary Jen Psaki thinks the U.S. supply chain crisis, which could ruin Christmas for millions of hardworking Americans, amounts to little more than "the tragedy of the treadmill that's delayed."

Psaki cracked the "joke" on Tuesday in response to a serious question from New York Times reporter Michael Shear, even as experts warn that rising prices and supply shortages are likely to wreak havoc on the upcoming holiday season. Psaki routinely scolds reporters for asking questions that, in her estimation, do not reflect the concerns of the American people.

Most Americans, for example, can't afford a personal treadmill and probably couldn't find the space to fit one in their residence. Psaki, however, can easily afford multiple treadmills and has more than enough room for them in her massive house, a Washington Free Beacon analysis has determined.

Public records show that Psaki and her husband, Greg Mecher, purchased the posh Northern Virginia property in 2019 for $1.64 million. The house is currently estimated to be worth almost $2 million, or more than five times the median home price in the United States.

The Free Beacon‘s anti–doxxing policy prevents us from revealing additional details, but we can confirm that Psaki's house is big enough to fit an entire fleet of expensive treadmills. In terms of square footage and the number of bedrooms, it is several times larger than the median single-family home in America, with a substantial lot size given the density of the area.

For the sake of providing additional context, Psaki's annual salary of $180,000 is nearly three times the median household income in the United States. In her most recent financial disclosure report, Psaki listed $579,918 in business income from Evergreen Consulting LLC, the public relations firm she founded. She also reported income of at least $5,000 annually from CNN, Lyft, and Demand Justice, a left-wing "dark money" group funded by billionaire George Soros.

The White House did not return a request for comment on how many treadmills Psaki owns.