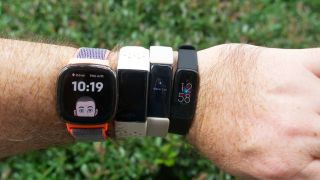 Exercising puts strain on a person's body, and many will use a fitness tracker to help monitor their progress and their vitals. But what happens when your wearable starts to cause more stress than the workout? That's what some are claiming in a new Fitbit lawsuit.

Arstechnica recently found a new lawsuit where some Fitbit Versa and Sense owners are receiving burns on their wrists in addition to burning calories. This isn't the first time that Fitbit has been hit with claims from issues with their wearables. However, previously Fitbit said that the redness was caused by wearing the device too tight or sensitivity to the material used in the band. This time it seems to be quite different.

The new lawsuit comes on the heels of one filed in March 2022 with similar issues regarding the Fitbit Ionic. In both legal filings, users claim that the fitness trackers are causing serious burns that are significantly worse than a rash. Users included in the filing have included their experience using the device and photos of some pretty bad burns.

Looking at the Twitter page for the Fitbit support account, it is easy to see that there is no shortage of users sharing their bad experiences. Looking through some of the tweets, there are a number of them detailing damaged chargers and batteries.

In addition to the new filing, those who we part of the Fitbit Ionic recall from March are bringing to light that Google is taking too long to issue their refund. The lawsuit says that Google is "suppressing" the funds, and some users are still waiting on their refund after eight weeks.

While Fitbit has been making some of the best fitness trackers for years, lately, they have been having a tough go of it. These recent issues are sure to cause some users to look to other brands to avoid any potential problems with their devices.

Chris Wedel is a fan of all things tech and gadgets. Living in rural Kansas with his wife and two young boys makes finding ways to get and stay online tricky. By utilizing his years of experience with the tech and mobile communications industries — success is assured. When not conquering connectivity challenges and testing new gadgets, he enjoys cruising a gravel road in his UTV with some good tunes.