Fitbit Versa 4: 5 things we want in Fitbit's next smartwatch 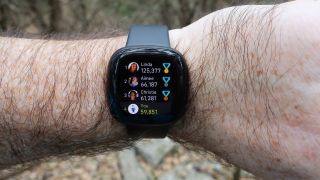 Since the release of the Fitbit Versa 3 and Fitbit Sense in summer 2020, Fitbit has stuck to compact trackers and kids' watches. Despite its age, we still consider Versa 3 the best Fitbit device available, with all the key features you'd want without the Sense's priciness or the Charge 5's finicky screen. But that just makes us even more eager for the Fitbit Versa 4 to finally arrive!

Thanks to a recent Fitbit leak, we know that the fitness brand is developing two new smartwatches with a 336x336 display resolution, which matches that of the Fitbit Versa 3 and Fitbit Sense.

These upcoming watches, which most experts assume are the Fitbit Versa 4 and Fitbit Sense 2, will reportedly use the same Fitbit OS instead of Wear OS, despite Fitbit's CEO saying its next smartwatch would transition to Google's OS.

So if the operating system and display haven't changed, what exactly is new about the new Versa? That's what we're here to speculate about today. From design upgrades to app improvements and new sensors, here's what we want to see from the Fitbit Versa 4 when it (allegedly) ships this summer.

It makes sense that Fitbit would stick with its own OS. Fitness brands need to prioritize simplicity and affordability, while Wear OS would require more RAM and exclude iOS users — a decent portion of Fitbit's user base. But whereas the Versa 3 was conceived before the 2019 Google acquisition, the Versa 4 should better reflect the newfound partnership.

We know, for example, that Fitbit stats will soon appear on your Nest Hub, the kind of synergy we're looking for. But what about on the smartwatch itself?

With the Versa 3, it took until June 2021 for full Google Assistant integration with voice responses. And while we appreciate Fitbit's commitment to post-launch updates, it should have a proper lineup of Google features and apps straight out of the gate by now.

For starters, why not replace Fitbit Pay with Google Pay? It'll make people more likely to use tap-to-pay and consolidate the number of services with your credit card info.

What other apps appear will depend on this new watch's processing power. Wear OS supports Calendar, Keep, and Maps. The first two, at least, might work well enough on your phone and let you check a workout calendar or check off a to-do list of exercises.

Google Maps might be too much to ask for; many of the best Garmin watches have map software, but they cost double or triple that of a typical Fitbit. Still, the compact Versa AMOLED display could certainly fit a rudimentary map for turn-by-turn directions while on the go.

A Fitbit watch won't offer perfect Google integration like the Pixel Watch undoubtedly will, but it should at least offer a budget version of that experience.

Fitbit doesn't publicize the chipset or RAM inside its watches, and if the Versa 4 sticks with Fitbit OS it isn't likely to need a Snapdragon Wear chip. But that doesn't mean we're satisfied with the performance status quo.

Fitbit watches lag. Whether it's when you tap on the display or wait for a workout to start, you'll notice a small delay in most cases along with the occasional freeze or stutter. It's not so crippling that it's unusable, but fitness smartwatch touchscreens are already unreliable because of the small display size and sweat interference. Not knowing whether the lag is due to the chip or the screen is frustrating.

If the Versa 4 wants to differentiate itself from past models, it won't just add new apps or a new sensor; it'll offer a speedy menuing experience.

The Versa 3 and Sense both have a capacitive, haptic faux-button that you squeeze to activate a function. It's meant to sidestep a sweaty touchscreen and quickly activate a feature during a workout. But our Sense reviewer complained that, "I occasionally found myself pressing on the area and not getting any response," while our Versa 3 reviewer said, "I had wildly inconsistent experiences with the capacitive button," which could be "hit or miss in everyday use."

Fitbit eventually patched the button software to provide better responsiveness, but it negatively colored the experience of using its watches for a lot of fans. A pseudo-button avoids the problem of accidental touches, but is also much less consistent than, well, a real button.

If Fitbit wants to prioritize an attractive design over usability, nothing I say will stop it. But it needs to either ensure the button works from launch or go back to classic buttons, which it used on past designs and practically every other fitness smartwatch maker relies on.

Note: Right after we scheduled this post, a new Fitbit Versa 4 leak showed a supposed look at the Versa 4 with a physical button. We feel vindicated, and decided to leave this entry in case this leak turns out to be false.

Both the Versa 3 and Sense are thick, weighing in at about 42g and 48g, respectively. Compare it to the Galaxy Watch 4 (26-30g), Apple Watch Series 7 (32-38g), or really any moderately sized smartwatch. Most Garmin watches weigh more but pack in much larger batteries and target a more hardcore audience. Fitbit wants to reach casual users, and most people would prefer something lighter and more attractive.

You can make the case that the Sense 2 should remain proudly large, so Fitbit can prioritize cramming in more sensors, RAM, music storage, optional LTE, and other premium tools. But the Versa 4 should go the opposite direction.

We suspect Versa will add ECG and EDA sensors, given the cheaper and lighter Charge 5 added them last year; but otherwise, we want Fitbit to shave 10g or so off the Versa 4 and make it distinctly thinner than the Sense 2.

The Fitbit Versa 3 hits 6 days of battery life or 12 hours of GPS tracking. Compared to most mainstream fitness watches that use AMOLED instead of LCD or memory-in-pixel, that's a respectable number. Some watches like the Amazfit GTS 3 hit 12 days/20 hours, but without offering NFC, 3rd-party apps, or other draining features.

If Fitbit follows our advice and adds more app support and functionality, while also squashing the design to make it more comfortable on your wrist, battery life would likely be the casualty. So perhaps the best we can hope for is that Fitbit treads water on battery life while improving in other areas.

If the Versa 4 ends up more of an iterative upgrade, however, then it should at least close the gap on Garmin watches if it can't match them. The Venu 2 Plus has a 9-day battery life and double the GPS-tracked hours. The Versa 4 will cost less upfront, but after your Premium trial expires, the subscription cost will quickly close the price gap between the two.

As a bonus Versa 4 wishlist item, we want Fitbit to do more with blood oxygen monitoring (SpO2) with its new watch, making it visible on the watch without needing a special watch face. And if people end up using this tool more, that'll require a better battery to compensate.

Compared to the Versa 2, the Versa 3 added a larger display, built-in GPS, a mic and speaker for calls and voice assistants, and new tracking data like Active Zone Minutes, all for the same list price. Will the Versa 4 make similarly robust strides to stand out, or will Fitbit avoid rocking the boat considering the last model's popularity?

With the Versa 3 atop our list of the best Fitbit devices available, we can only hope the Versa 4 makes enough improvements to claim that spot. But the identical display size has us prepared for disappointment. We should find out in the next couple of months whether or not to get our hopes up.

Michael spent years freelancing on every tech topic under the sun before settling down on the real exciting stuff: virtual reality, fitness wearables, gaming, and how tech intersects with our world. He's a semi-reformed Apple-to-Android user who loves running, DD, and Star Wars. Find him on Twitter at @Michael_L_Hicks.