Is the rowing machine a good workout? 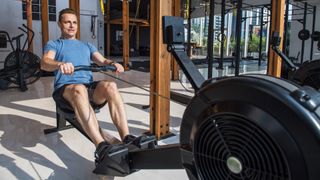 If you ask a historian 'is the rowing machine a good workout' they'd likely say yes. There have been variations of rowing machines in existence since the 4th century BC (amazing!), where the ancient Greeks used them as a training device for soldiers to prepare for sea. Whilst the aims of those rowing machines had a somewhat more sinister undertone, you could argue that if an exercise approach has lasted a couple of millennia it has to be an effective one.

The real modern day version of rowing machines came into being in the mid 20th century. As the form, build quality and measurement accuracy of the rowing machines improved, they became more popular. In 1981 the first Concept 2 rowing machine design was launched and the rest, they say, is history.

Gyms the world over have rowing machines as an integral part of their kit, and they're often some of the most popular devices in each one.

Why is the rowing machine a good workout?

A rowing machine is a low-impact, full-body cardiovascular workout that requires little in the way of technique. From a practicality point of view they’re excellent - compared to a lot of other home exercise machines they’re lightweight, small, easy to store and significantly cheaper to buy. Finally, they’re incredibly safe relative to other fitness equipment.

Let’s look at these points in more detail…

A rowing machine offers users the chance to partake in a wide variety of cardiovascular workouts. You can perform steady state (constant workout pace and intensity for a given period of time) or HIIT (high intensity interval training) workouts, both of which have been shown to be very effective at improving cardiovascular fitness and performance.

On some rowing machines (in particular the Concept 2 models), the computer has various games in-built on the machine, so you can mix up your workout by playing  fitness-based games. If you’re susceptible to boredom, this can help a lot!

You can also store your previous workout data on the device so you know how you’re improving. Finally, app-based support gives you extra tips and advice, not to mention workout support and a training diary.

In order to lose weight we have to consume fewer calories than we burn. We do this by reducing calorie intake by following a calorie-restricted diet, then increasing our energy expenditure through exercise.

Workouts that burn a lot of calories are especially effective when it comes to weight loss. The rowing machine is an excellent calorie burner , with some particularly fit people being able to burn over 1000 calories per hour on the machine. It’s hard work, but there’s a significant body of evidence showing that it’s a very effective workout machine for all kinds of people. We've done a whole investigation on how to use rowing machines to lose weight.

Very safe - no impact on the joints

One of the concerns many people have about exercise is how safe it is. Whilst almost all gym-based exercise is very safe, the rowing machine is a stand-out in terms of low injury risk. In a study analysing gym injury data taken over 14 years, rowing machines barely featured.

There’s also no impact on the joints during the use of a rower, so if you’ve had hip, knee or ankle trouble you’ll be safe to use the rower without worry of further damage.

Rowing machines are easy to use

Compared to exercises such as weight training, dance classes, aerobics classes and the like, a rowing machine is very easy to use. Of course there is a technique to rowing, but that’s more about efficiency than safety. Good rowing technique makes you a faster, smoother rower. We've put together a feature that compares rowing machines vs treadmills, to help you decide which is right for you.

Excellent rowing machine technique will take a few minutes to learn, unlike a dance class where you’ll spend a lot of time learning routines and steps, or weight training where you’ll learn lots of different exercises and have to be careful to execute lifts with safe and effective form.

Is it as good at home as the gym?

If you’re thinking of an exercise machine to have at home, a rowing machine is a solid bet. If you look at the price as the first comparison, some of the top rowing machines on the market costs around $900-$1000. A good treadmill will be $3000+, and a good exercise bike will be around $1000.

A rowing machine is smaller (8’ x 2’ is the usual footprint), lighter at less than 60 LBS and easier to store (can be pushed against a wall, rolled out of a room or even broken down into a couple of sections) than most other home exercise options. If you don’t have a dedicated gym room, this is a big asset.

Compared to a treadmill they’re much quieter - there’s no pounding up and down during use (which can be a problem if you have neighbors below you) and there’s no loud motor on the front. In all fairness the flywheel can be relatively loud during a fast row, but it’s not a big deal.

The rowing machine burns a lot of calories, it’s easy to use, it’s very safe and gives you a fantastic, all-body cardiovascular workout. It has been proven in the scientific literature to help people improve their fitness, lose weight and improve their general health and wellbeing.

It’s cheaper to buy than many of its rivals, it costs less to run and it’s very easy to store on account of its size and weight. The convenience of having a rowing machine at home means you don’t have an excuse for missing your exercise.

It’s a machine that can be used by the whole family and there really is no upper age limit. It doesn’t matter if you’re 9 or 90, you’ll still benefit from regular workouts on the rowing machine. You don’t need amazing strength or mobility, just a willingness to do the work.

Finally, thanks to the low impact nature of the exercise, your post-workout recovery time is really limited. You won’t be stiff and sore after rowing, so you’ll be able to exercise more frequently, boosting your fitness and weight loss quicker.

Steve Hoyles is a personal trainer and gym owner. He has written about health and fitness for over a decade, including Men’s Health, Men’s Fitness, BBC, Catalyst Athletics and hundreds of fitness websites as clients. He’s usually found at his gym or taking one of his two sons to their various sporting commitments!