No, Apple isn't gearing up to buy Peloton 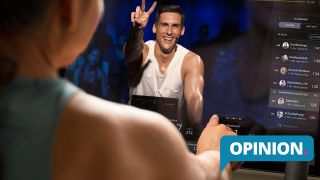 It’s been a rough few months for Peloton, and we’re starting to hear rumors that Apple might be interested in buying the ailing company and working its on-demand workouts into Apple Fitness Plus. I don’t see that happening any time soon, though – it’s just not the right fit.

First, there’s the brand itself. Although its reputation has taken a beating in recent months, Peloton has always been aspirational. While the digital-only membership costs around the same as most workout subscription plans, the bike has always been the main draw – and it’s a pricey status symbol. The Peloton Bike starts at $1,895 / £1,750, while the flashier Bike Plus starts at $2,495 / £2,295 – and that’s before you add in the monthly payment necessary to access the fun live workout classes led by bright-eyed, bushy-tailed instructors.

You could get a great workout on a regular spin bike in front of your TV, but you wouldn’t catch Miley Cyrus or Venus Williams showing off their Sunny studio cycle on Instagram. Peloton is a name synonymous with stylish young people working out in open-plan suburban homes and chic loft apartments.

Apple is focusing on activities like running and walking, which have a lower barrier to entry than spinning (Image credit: Apple)

Apple, by contrast, isn’t quite so exclusive. Yes, a 1TB iPhone 13 Pro Max costs as much as a Peloton Bike, but there are also much more affordable devices like the iPhone SE for those of us on a modest budget. The Apple Watch 7 is moderately priced as well; you don’t have to be Mr Big to join the club.

Then there’s the hardware. Apple Gymkit allows you to connect an Apple Watch to a compatible treadmill, bike or rower so you can get more accurate workout stats, but so far the company has avoided manufacturing its own machines – and that makes sense. Apple Fitness Plus includes workouts that you can follow on treadmills and exercise bikes, but that’s only a small part of its overall offering. The company is putting much more emphasis on activities like walking, running, and yoga that have a lower barrier to entry.

Building exercise equipment would be a huge step for Apple, even with Peloton’s supply chains and manufacturing facilities, and Apple would likely want to start afresh rather than simply re-badging Peloton’s existing machines. Everything would likely need to be fully redesigned to fit in with Apple’s infamously stringent industrial design process, and there would almost certainly need to be a more accessible, more affordable bike available for anyone who’s interested in spinning but can’t drop almost $2,000 on the equipment.

If Apple was to sell its own branded exercise bikes, it would likely want to take design in-house (Image credit: Maridav / Shutterstock)

That’s before we get into the matter of the Tread and Tread+, which were recalled in May 2021 after reports of accidents and injuries – including one fatality. Peloton has now developed a fix for the Tread to prevent its screen coming loose during workouts, but Apple may not want its name associated with it at all.

Finally, there are the Peloton instructors who make the live classes so appealing – what would become of them? Apple has its own carefully curated pack of Fitness Plus trainers, but the whole experience isn’t quite so personality-focused. Would Apple be happy to throw in Peloton’s team of 55 leaders as well, or would it prune the ranks and risk losing subscribers?

Although Apple and Peloton might seem to have a lot of commonalities at first glance, they don’t overlap in the right places, and I can’t see Tim Cook revealing a spin bike as ‘one more thing’ any time soon.

Cat is the fitness and wellbeing editor at TechRadar. She's been a technology journalist for 12 years, and cut her teeth on magazines including PC Plus and PC Format before joining TechRadar. She's a trained run leader, and enjoys nothing more than hitting the pavement and helping new runners achieve their goals. If you have a story about fitness trackers, treadmills, running shoes, e-bikes, or any other fitness tech, drop her a line.