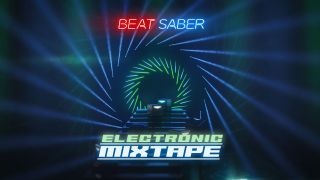 The Electronic Mixtape for the Meta Quest 2 game contains 10 songs that span over two decades of electronic music including the iconic Sandstorm by Darude to more contemporary hits like Marshmello's Alone. This is a collection of songs from various artists unlike DLC packs which usually focused on one artist, such as Lady Gaga and Skrillex.

The new songs also feature the Arc and Chain blocks introduced in the 1.20.0 update earlier this year. Arc blocks has players holding notes from one block to another, while Chain blocks are several smaller notes that have to be hit in quick succession.

The Electronic Mixtape is available beginning today and can be bought for $13 for all 10 songs, though every song from the pack can be purchased individually for $2 each. Check out the full list of songs in the pack below.

Beat Saber has held a spot on our list of best Oculus Quest 2 games thanks to its fun gameplay of swinging laser swords rhythmically in VR and receiving a light workout. It also helps that the game has consistently received free updates and new packs of songs since its originally launched in 2019.

The Meta Quest 2 offers increased power, resolution, and flexibility over the original virtual headset. It is a complete, all-in-one headset that does not need to be tethered to a PC or smartphone in order to work.

Thomas Meyer fell in love with video games starting in the mid '90s with a NES, Super Mario Bros., Duck Hunt, and Jack Nicklaus' Greatest 18 Holes of Major Championship Golf. He hasn't stopped and is not planning on to anytime soon. Covers Google Stadia and a little bit of virtual reality.