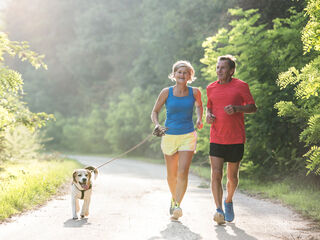 Humans evolved with the ability to run long distances using relatively little fuel while chasing animal prey across the savannas millenniums ago.

As hunters, early Homo sapiens developed spectacular endurance that allowed our ancestors to outrun other species who may have been faster sprinters but didn't have as much stamina over the long haul. As runners, if our species had a motto that summed up our energy-efficient pace, it would probably be, "Slow and steady wins the race."

New research from Stanford University sheds light on how the running efficiency and calorie conservancy that's baked into our evolutionary biology affects recreational joggers, 5K runners, marathoners, and everyone in between. These findings (Selinger et al., 2022) on how the energetics of "running in the wild" affect ecological running speeds were published on April 28 in the peer-reviewed journal Current Biology.

For this study, first author Jessica Selinger and colleagues at Stanford, who study the science and biomechanics of peak performance, started by gathering laboratory data on running energetics from 26 people using treadmills. Additionally, they obtained big data from hundreds of "free-living" runners who wore fitness trackers while doing daily activities and running "in the wild" (not in an exercise physiology lab). Then, they compared laboratory-controlled data with free-living data.

Selinger et al. found that regardless of whether someone was casually jogging for 10 minutes or training for a 10K, most runners subconsciously click into an "energy-optimal speed." Notably, if someone isn't making a conscious effort to defy their hardwired biology and run faster, runners' bodies automatically gravitate towards an energy-saving pace that burns fewer calories.

"Human runners prefer a particular running speed that is independent of task distance and is consistent with the objective of minimizing energy expenditure," the authors explain. "Overall, when we go for a run, although a goal may be to burn calories, we move at a speed that minimizes [calories burned]. This is consistent with free-living preferences of other, nonhuman animals for energy-optimal locomotion—be it walking, flying, or swimming."

"Minimizing energy expenditure has evolutionary advantages, it allows us to move farther on fewer calories. We share this trait with other animals, be it flying birds, swimming fish, or galloping horses—there's evidence that we all move in calorie conserving ways out in the wild," Selinger said in a news release.

"When you go out for a run, you run to have your best fuel economy," senior author Scott Delp added. "Regardless of the distance you travel, you run in such a way that you burn the least amount of fuel per distance traveled."

The Pros and Cons of Running at an Energy-Efficient Pace

Running at an energy-efficient speed isn't necessarily good or bad. The pros and cons of sticking to an energy-optimal pace versus running at calorie-incinerating speeds depend on your personal goals.

For example, if you like to jog because it improves your mood, stimulates creativity, and offsets the risk of depression—running at a comfortable, energy-saving pace means you can reap all the cognitive benefits of jogging without getting burned out, overstressing your system, or increasing your risk of injury. (See, "Superfluid Brain Connectivity Streamlines Cluttered Minds.")

On the flip side, if you're a jogger who's trying to lose weight by burning extra calories via cardio workouts, you need to consciously push harder to avoid running on "autopilot" and allowing your body to click into its natural energy-conserving pace that doesn't burn a lot of calories.

Also, if your goal is to become a faster runner, you'll need to push past your energy-conserving comfort zone so your body adapts by improving cardiorespiratory fitness and VO2 max levels.

The latest research (2022) on the energetics of running suggests that our bodies evolved to run efficiently and conserve calories by automatically seeking energy-optimal running speeds. Much like water creates equilibrium by seeking its own level, our bodies have an energy-conserving pace that runners instinctively gravitate towards.

Knowing this can serve as an evidence-based reminder to push beyond your comfort zone if you want to improve fitness or lose weight. Delp recommends finding your energy-optimal zone and then pushing slightly above it. "At those speeds, runners will see more weight loss and endurance gains," he says.

If you need some motivation to override your biologically encoded energy-saving running speed, Selinger recommends listening to uptempo music. Synchronizing your foot strikes with the beats per minute of an energetic song will trick your feet into picking up the pace. "Listening to music with a faster pace has been shown to help speed up stride frequency, which can then increase running speed," she concludes.