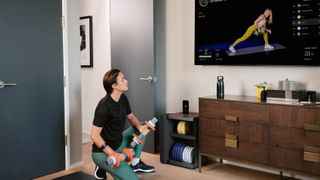 Sure, a handful of cheap fitness gadgets are available, but total body fitness is an expensive business. And one company aims to fix that.

“How do we make this more accessible, more affordable?” Moawia Eldeeb, Tempo CEO and co-founder, asked TechRadar in an exclusive interview. “$2,500 is not affordable,” he added. Eldeeb is himself a former personal trainer, and indeed, his goal is to democratize personal training. “How can we offer personal training to everyone at a fraction of the cost? Because $120 an hour is not something that's affordable.”

Last year, the company launched Tempo Studio – essentially a floor length mirror that cleverly conceals a complete weight set in its triangular torso, and relies on time-of-flight cameras and AI to sense your squat thrusts and observe your overhead presses. Live coaches then work with you to personalize the routine – something Peloton can’t promise.

The Move is essentially a designer cabinet about the size of a side table or credenza, which holds a 50lb weight set – four 1.25lb plates, four 2.5lb plates, and four 5lb plates – and a pair of dumbbells. (Ten-pound weights are an optional accessory, as is a bar, but Eldeeb said most customers simply weren’t using it.) Access to the weights is via an elegant, cloth-covered panel that adheres to the front of the unit by magnets, which grip it in place with a satisfying snik.

Atop the cabinet sits a plate for your iPhone called the Core – and that’s right, it’s iPhone only, folks. The Tempo Move leverages the TrueDepth camera in today’s Apple phones and will take advantage of Apple's LiDAR scanner in the future, the company promises.

Yes, Android phones can do exactly the same thing. We know. Shhh. We know.

With the aid of the cameras in your iPhone and some AI wizardry, the fitness device can recognize which weights you’ve got on your dumbbells and gauge the quality of your curls. Are you extending your arm fully, or merely half-assing it? Like the Shadow, Tempo Move knows.

Instead of the full-length mirror, an enormous part of the Studio’s cost, the Core simply outputs to your HDTV. Snap it off the weight-storing cabinet, carry it over to your TV, and you’re instantly ready for a workout. On screen you’ll see real-time feedback on your form, including your range of motion and score on a leaderboard as calculated by heart rate, reps, and weights.

As with Peloton and other connected fitness devices, the service is a separate cost: $39 (about £28 / AU$50) per month, in this case.

The weights are color coded to work with the AI, and elegantly covered in rubber, so as to avoid damaging your fancy, hard wood floors. They slip on and off the dumbbells as easily as you gained those extra 10lb over the holidays. And with their help, you’ll shape up just as swiftly.

Tempo Move is available now direct from Tempo and from Best Buy, and will ship in early December for the holidays – US only, for now. Financing options are available, the company says.