The War To Bring Down Peloton 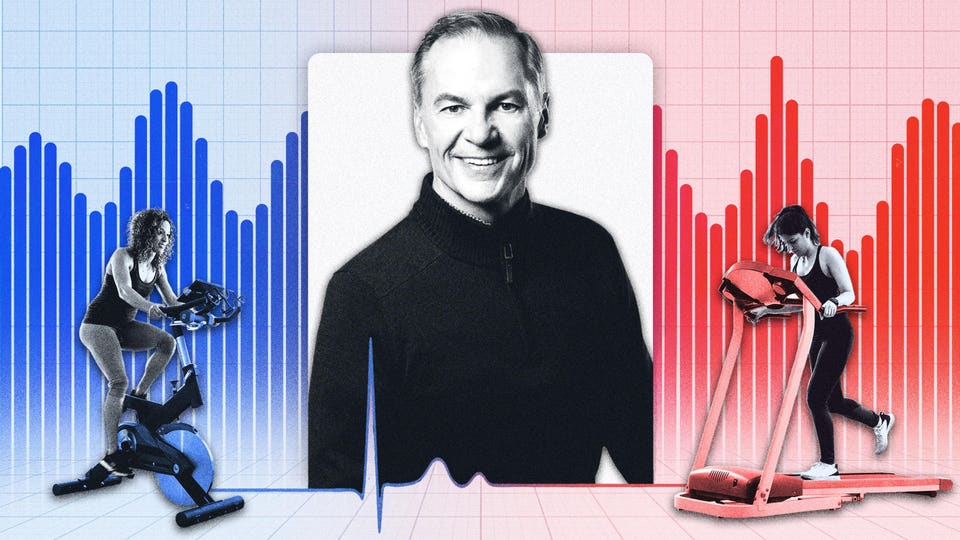 On the morning of March 22, 2021, a team of three fitness trainers backed by a 39-person film crew began a sunrise trek from the base camp of Mt. Everest to Kala Patthar, an 18,300-foot peak with an expansive view of the summit of the tallest mountain on Earth. As the guides hiked uphill, their trek was live-streamed to more than one million iFIT subscribers around the world, all working out on touchscreen-fitted NordicTrack and ProForm treadmills, bikes and ellipticals—with the machines automatically adjusting to the mountain’s escalating incline at every step. That trek was a preview of a new 18-part series of virtual workouts filmed in Nepal, part of a growing library of interactive workouts shot on the ground in locations ranging from Maui and the Grand Canyon to Tanzania’s Mt. Kilimanjaro and the Swiss Alps.

"I was on Everest while it was being filmed live, but I couldn't do the whole workout," says Scott Watterson, iFIT’s 66-year-old cofounder and CEO, in a late March Zoom call from his wood-paneled office in Logan, Utah. He adds with a chuckle: “My family suggests I need to spend a little more time in the weight room.”

When the pandemic shuttered gyms across the country last year, millions of Americans turned to exercise bikes, treadmills and online workouts at home—and the biggest winner of that shift was Peloton, which posted its first net profit in its history in 2020. But Peloton's three million subscribers aren’t the only ones breaking a sweat over the nine-year-old startup: Watterson has been racing to catch up since Peloton launched its first bike in 2014. He’s been in the fitness game since 1977, when he and his college buddy Gary Stevenson started what later became iFIT, the maker of NordicTrack and ProForm exercise machines, when they were students at Utah State. When Peloton founder John Foley was still a teenager in the late 1980s, iFIT was pioneering home fitness with treadmills hooked up to VHS players that automatically adjusted the incline to match the workout on the tape.

Peloton founder John Foley got the idea for an at-home exercise bike when he saw his wife struggle to reserve a place in Soulcycle class.

Once the largest maker of fitness equipment in the world, iFIT has since been dethroned by the much younger Peloton. After an alleged 2013 meeting at iFIT’s Logan office, where iFIT claimed in a 2016 lawsuit that Foley asked for access to the company’s bike technology—an offer the firm refused—Peloton took off and quickly eclipsed its older competitor. When the pandemic hit, Peloton’s popular touchscreen-fitted indoor bike and online workout classes allowed it to cement its place at the top: Its nearly $3 billion revenues last year—its first full year since going public in September 2019—were double iFIT’s $1.5 billion.

iFIT is now planning its own public listing, less than a year after securing a $200 million investment from Bernard Arnault-backed private equity outfit L Catterton in October. That deal valued the company at $7 billion, and Forbes estimates that Watterson’s majority stake in iFIT is worth $3.2 billion (Forbes applies a 10% discount to valuations of private companies). That’s more than Foley’s $2 billion fortune, which is largely made up of his 6% stake in Peloton including options.

They’re not the only ones fighting for a cut of the booming $244 billion global market for fitness classes, equipment and wearables. Five newcomers including AI-powered fitness mirror startup Tempo and strength training machine maker Tonal have collectively raised more than $800 million since January 2020, while Lululemon acquired fitness device maker Mirror for $500 million last June. Spin bike studio SoulCycle is also getting into home fitness, launching its own at-home bike in October, while Apple is now competing for eyeballs and muscles after debuting its Fitness+ service in December. And Beachbody, which saw digital subscriptions to its fitness streaming platform grow by 53% in 2020, went public in a merger with exercise bike maker Myx Fitness and a blank-check company in June in a deal that transformed it into an instant threat to both Peloton and iFIT while making its cofounder Carl Daikeler into a billionaire.

Of course, Watterson isn’t going down without a fight. iFIT is continuing to roll out new products, including its own fitness mirror, the ‘Vault’, launched in January. It’s adding 100 new workouts a month and partnered with Planet Fitness, which now has a minority stake, in a deal that grew its workout library to nearly 15,000 classes, making it 50% larger than Peloton’s. It’s also getting into mindfulness, introducing a series of mindfulness exercises and yoga classes called iFIT Mind. And it’s still adding to its arsenal of more than 400 patents, recently unveiling a new workout mode that automatically adjusts incline and resistance based on a target heart rate.

Those closely-held patents are at the heart of iFIT’s fight against Peloton: iFIT first sued Peloton in 2016 for patent infringement over its signature bike, claiming Foley had copied the technology from iFIT. While that case was settled in 2017, the legal battles heated up again when Peloton sued iFIT in May last year, and there are now at least three ongoing lawsuits between the two companies.

Scott Watterson was raised in a Mormon family in the small college town of Logan, Utah. He didn’t stray too far from home until 1977, when he was age 22. That’s when he took a break from his studies at Utah State to travel to Taipei for a two-year mission to spread the Mormon faith. It was also the same year he and his classmate Gary Stevenson started a company called Weslo—with the help of a $2,000 loan from Watterson’s father—that sold imported furniture from Asia. After returning home from Taiwan and graduating with a business degree and a minor in Chinese in 1979, Watterson pivoted to selling wood-burning stoves and later exercise bikes and treadmills, sold under the ProForm brand and largely manufactured in Taiwan.

Watterson and Stevenson sold most of the company to Weider Health and Fitness for an undisclosed amount in 1989, with the two cofounders still minority partners and Watterson CEO. Five years later, private equity firm Bain Capital—then led by Mitt Romney—acquired a majority stake in Weslo from Weider in a $370 million leveraged buyout. Under Bain’s stewardship, the firm quickly snapped up fitness brands such as NordicTrack in 1999 and Freemotion in 2000. In between another three-year mission to Taiwan in 2004 and the departure of his cofounder Stevenson in 2008 to serve as a member of the Mormon Church's First Quorum of the Seventy, Watterson and Bain built the company into the world’s largest maker of fitness equipment.

In 2010, Watterson moved aggressively to protect the company’s prized trove of patents. Then known as ICON Health Fitness, the firm filed a patent infringement lawsuit against ellipticals sold by a smaller competitor, Octane. The lawsuit made it all the way to the Supreme Court in 2014 and the justices unanimously ruled in favor of Octane—a decision that forced ICON to pay more than $1.6 million in legal fees and established a precedent making it easier for the losers in frivolous patent lawsuits to pay the winner’s litigation costs.

Watterson (right) and iFIT donated one million masks to Utah’s Covid-19 response in May 2020. “Helping people stay healthy is what we do every day in our business,” he said.

While ICON, now called iFIT, was battling in court, its toughest challenge yet was brewing thousands of miles away from Logan in New York: In 2012, John Foley, who had spent eight years managing various websites for media conglomerate IAC, quit his job at Barnes Noble to launch Peloton. He went on to raise more than $300,000 on Kickstarter the next year to build an interactive bike fitted with a touchscreen streaming live and on-demand classes.

As Peloton grew rapidly, Watterson bought the majority stake from Bain in 2015 and fought back by introducing workout classes filmed around the world in 2017. (Peloton responded with its own treadmill).

Once again, iFIT tried to win the war in court. It sued Peloton in 2016, alleging that Foley had visited the firm’s Logan headquarters in July 2013—before Peloton had sold a single bike—to meet with executives and request access to the company’s technology; iFIT refused. iFIT claimed that Foley ignored multiple warnings, that day and later on, to not infringe on the company’s patents. The suit was ultimately settled in 2017 when the two firms signed a license agreement relating to the bike’s technology.

The calm didn’t last for long. Peloton went public in an IPO that raised $1.2 billion in September 2019, just a few months before Covid-induced shutdowns pushed up sales of bikes, treadmills and online fitness subscriptions. Peloton’s stock price rose more than 300% from March 2020 to March 2021, earning Foley a spot on Forbes’ 2021 World’s Billionaires List with a $1.5 billion fortune.

The home fitness boom helped iFIT catch up to Peloton’s lightning-fast growth rate, if not its overall sales: iFIT’s revenues grew by 50% from $1 billion in the first nine months of 2020 to $1.5 billion for the whole year, nearly matching Peloton’s 56% growth over the same period.

"During the pandemic, people raced to anything having to do with home fitness,” says Simeon Siegel, a senior analyst at BMO Capital Markets. “Anyone who sells fitness equipment over the last year has sold anything they've had in stock."

At the same time, Peloton brought the battle back to the courtroom: In May 2020, Peloton sued iFIT alleging it had copied Peloton’s feature displaying class participants’ competitive data in a leaderboard. Five months later in October, iFIT filed its own patent infringement lawsuit against Peloton related to its bike’s automatic change of resistance levels during workout classes. In February, a judge denied iFIT’s request for a preliminary injunction and the lawsuit is still ongoing.

But that wasn’t the end of the legal drama: Two months later in April, iFIT filed another patent infringement suit against Peloton, claiming it copied a feature that allows a fitness trainer to remotely change resistance and incline levels on users' machines during a workout.

“We have multiple lawsuits with Peloton that are in different stages of litigation. As an innovation leader in the connected fitness space, our intellectual property is vital to our company, and we will take any and all necessary actions to protect it,” a spokesperson for iFIT said in a statement. Peloton did not respond to multiple requests for comment.

Watterson is unbowed, viewing the competition with Peloton as an advantage: “To the extent they continue to enjoy our proprietary innovations, we can kind of predict where they're headed.”

The home fitness market is awash in competition, from the struggle between iFIT and Peloton to the onslaught of startups. But there’s a new trend changing the landscape: Consumers are increasingly breaking out of the one-stop-shop model, instead choosing to combine one company’s machines with classes offered on other platforms.

"Certain trainers I like have workouts on their platforms but also on YouTube,” says Candace Marie, a social media consultant and NordicTrack bike owner in New York. Gideon Akande, a fitness instructor based in Chicago, offers workouts on both the iFIT platform and his personal YouTube channel. Adds Siegel of BMO: "There comes a point where the consumer is going to dictate how they want to work out, and they might like a machine but prefer different content.”

Watterson still believes iFIT can edge Peloton in the range of machines and content it offers, enough to keep customers buying its equipment and subscribing to its classes as the company he founded as a college student 44 years ago prepares for a potentially lucrative IPO later this year.

“As an innovative company, you create the idea and then [competitors] try their best to come about it from a different direction," he says. "People wanting to emulate your ideas is always flattery.”