Your Body Is Built for Speed. Use it to Sprint for Better Workouts.

When was the last time you really sprinted? Running all out, arms pumping, core braced, knees driving, feet detonating off the ground with every stride. For many of us, the answer is flailing through suicides back in high school or hitting the playground in even more ancient times.

For the men and women practically flying on treadmills at the Better Every Day gym in Orlando, the answer is now. They’re members of the Movement/Athleticism/Power (MAP) group class, which was created by trainer Trevor Anderson, C.S.C.S., and features, more often than not, ten-second sprint intervals that push you to run all out. “Sprinting is my solution when people start talking about their goals,” says Anderson, the owner and founder of Better Every Day. “As long as a person is healthy enough to do a ten-second interval, sprinting can be a viable solution for a lot of these things.”

The things he’s talking about are likely already the reasons you hit the gym: building muscle, shredding fat, chiseling your abs, and prepping your body for backyard football and playground hoops. Infusing your workouts with a dose of speed can help with each goal. For years, pro sports teams have used speed work to hone power and explosive athleticism, which is partly why Lee Taft, a veteran trainer known as “the speed guy,” has conducted sprint clinics for the Philadelphia Phillies, Oklahoma City Thunder, and Boston Celtics for the past two decades. But the practice only recently began trickling down to trainers who work with mere mortals.

Sprinting was largely ignored by most gymgoers for years, in part because bodybuilding preached slow, controlled reps to forge muscle and long, steady jogs to melt fat. As working out like a pro athlete became more of a thing and CrossFit eclipsed bodybuilding, more weekend warriors tried intense and diverse training methods. Over the past five years, the spread of manually powered treadmills that allow you to track your max speed has accelerated the trend even further by gamifying sprinting. And who can resist a good game? Anderson recently told a client to hit 13 miles per hour during his sprint. The client got to 13.5. “Having a quantitative measure of where you are pushes you to go even faster,” he says. 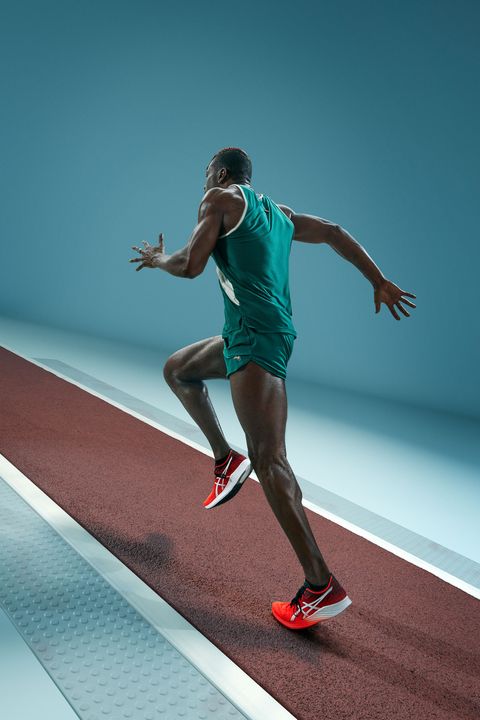 Reaching these benchmarks doesn’t come easy. Sure, you may run in a group fitness class (and the trainer may even tell you to “sprint”), but you’re rarely going completely all out in those settings. Sprinting requires you to expend max effort, willing yourself forward with every ounce of power you can muster. (Even big-toe strength matters in a sprint; your big toe is the final point of contact your body has with the ground on every stride.) So intense is a true sprint that it’s over in ten to 15 seconds (or less!), and you need minutes to recover before you’re ready for another one. A sprint challenges your body the same way a single ultraheavy deadlift rep might, forcing you to generate strength and explosive power.

Yes, all of this is as energy draining as it sounds, so Anderson gets why you may initially be afraid to give it a try. “When people hear the word sprinting, they think of Usain Bolt,” he says. “They think that every sprint means there’s a guy running a ten-flat 100 meters and that’s what sprinting is all about.”

Except you’re not sprinting for a world record—and neither are most of the people in Anderson’s MAP classes. But you’re supercharging your body in a way that most training (and everyday life) simply can’t. During most exercises, you can relax for a moment, whether that means mailing in a biceps curl or daydreaming through a segment of your Peloton ride.

But every step during a sprint is about power and precision, and this improves your first step in, well, everything. From pickup basketball to chasing after your toddler, your body learns how to start any motion quickly, and you’re insulating yourself against the muscle pulls and strains that come from sudden unplanned moves. 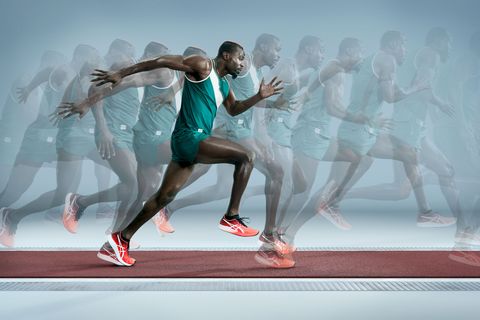 For a split second during every stride, your torso and back leg should form a straight line, propelling you forward. Called “hip extension,” this moment requires your glutes to kick into overdrive—and mastering it builds athleticism and bulletproofs your lower back, too.

Your early strides have you powerfully driving your knees to your chest as your body leans slightly forward, a moving mountain climber of sorts. This challenges your entire core (abs, lower-back extensors, obliques, and much more) to brace tightly, a constant-tension challenge for as long as you’re running.

Your hamstrings play multiple roles on every single stride. They drive your knees to bend, key to getting your back leg off the ground and in front of your body during each step. Your hamstrings then work again, helping you straighten your legs in line with your torso and push off the ground.

Get On Track With These Speed Workouts

Game plan: This workout teaches acceleration. Sprint 10 meters. Walk back to the start. Repeat as many times as possible for 10 minutes. Add 5 meters each week, working up to 100. Do this twice a week.

Game plan: Learn to run fast under fatigue. Sprint for 100 meters, then jog very slowly for 50 meters. Repeat this 7 times. Rest 6 minutes. (Yes, really.) Repeat the sequence. Do this twice a week.

This content is created and maintained by a third party, and imported onto this page to help users provide their email addresses. You may be able to find more information about this and similar content at piano.io